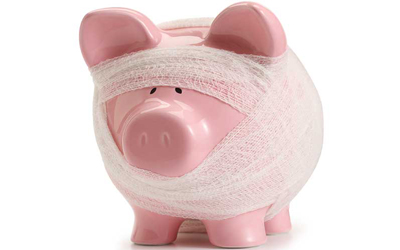 A recession is defined as two consecutive quarters of negative Gross Domestic Product (GDP) growth. In simple terms, it means that that GDP declines for two three-month periods in a row, or that the output of the economy shrinks.

Why Do Recessions Occur?

Recessions can occur for many reasons. Some of them include a dramatic increase in energy processing, a slowdown in consumer spending, high interest rates, high debt levels, and a general lack of confidence in the economy's prospects. Most recessions are characterized by large numbers of layoffs, difficulty in finding jobs, and reductions in income. Many people find themselves forced to take lower paying jobs, and it is common for both business and personal bankruptcy filings to increase during recessions.

Why do recessions occur? No one really knows. Economists understand that the economic landscape is always changing: New technologies are introduced, consumers' tastes change, investors' goals change, wars are fought, even bad weather can have an impact on the economy. Yet the root cause is still the subject of considerable debate.

If the economy experiences a recession, the most common solution is to stimulate growth by reducing interest rates and increasing government spending. The theory is that if more money is made available to the economy, more individuals and businesses will have an opportunity to make money and ultimately spend it. Unfortunately, this strategy does not always work. Recessions are often indicative of attitudes or moods. Here is an example of how attitudes and expectations can affect the economy: A fall in consumer confidence, combined with an indication that consumers intend to pay down debt rather than take on new debt, may be an indication of a slowdown in consumer spending sometime soon. This is a case where interest rate cuts or government spending will probably have little effect. If consumers do not intend to spend the money they have, making more money available to them would probably not have much success in stimulating economic growth.

Although recessions are beyond our control, we are not totally at the mercy of economic cycles of boom and bust. The most important step anyone can take is to build a solid financial plan that includes creating and using a budget, savings, and debt reduction. If your financial situation is strong when a recession hits, you will get through it much easier.