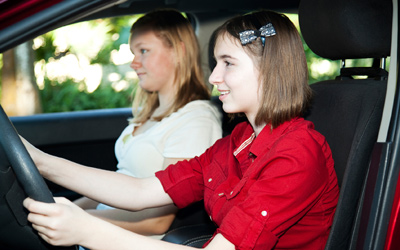 Parents have mixed emotions when it comes time for their teenager to get their driver's license. Of course, we are happy to see our children mature into young adults capable of self-sufficiency. But at the same time, it's nerve-racking thinking our kids are actually behind the wheel without us there to protect them. Once we get over those emotions, the reality is that putting your kids on the auto insurance is going to cost you, and we're not talking about your sanity!

The Cost of Teenage Drivers

The day has finally come! After many, many hours of white-knuckle practice sessions, your teen is finally getting their driver's license. But before handing over the keys to the family truckster, you still have to add them to your insurance policy. However, depending on which state you live in, this could cost you more than you ever expected! According to a study by insurancequotes.com, insurance premiums for a typical married couple increase about 84% when adding a teenager to their policy. In the case of a male teen, they can sometimes increase up to 96% and for a female teen, 72%. Why such high premiums? Shouldn't your insurance rates simply go up the cost of an additional person?

Why Does My Auto Insurance Premium Increase So Much?

Statistically, teens are riskier drivers. Granted, some may be the safest drivers out there, but insurance companies don't care about the exception - they care about the rule. With the new freedom of being able to drive, some teens take it too far and choose to speed, drive recklessly, or show off. This causes more accidents and, in turn, causes premiums for teenage auto insurance to increase drastically in some states. Each state has its own reasons for how to regulate the premiums for their residents, which makes it difficult to say exactly what will affect your particular premium cost. These reasons typically include state geography, local driving patterns, and how that state has chosen to regulate their premiums.

Your geographic location may not seem like it could affect your premium, but for some insurance companies, it's a huge factor. It is believed, from research documented on insurancequotes.com, that states with a more rural landscape find that teens drive more recklessly in regards to speed. It is believed that the less populated an area is, the higher the chances are that a teenager will take advantage of an empty rural road and increase their speed. The faster the car, the higher the impact, and the more severe the crash is. Typically, in more urban locations, the speed of the car is limited because of the density of traffic. An example of this would be the state of New York, widely known to be crowded (at least in the larger cities), being the 3rd lowest in terms of premium increases.

The way each state chooses to regulate, or the way they are allowed to regulate, can drastically affect your premium, as well. When we look at Arkansas, at the top of the list with a staggering 116.34% increase when adding a teenager, compared to Hawaii's increase of just 18.10%, it might seem confusing and arbitrary. One reason for this drastic difference in premium increases would be that Hawaii isn't allowed to use any restrictive factors to determine the cost of the premium. The cost of a teenager's auto insurance turns out being the same as an adult because their young age and lack of driving experience cannot affect them in any way. Arkansas, on the other hand, is allowed to take into account the driver's age, gender, geographic location, and type of vehicle. So, a newly licensed, teenage male living in Arkansas, driving a brand new car, would cost his parents an average of 98.24% more on auto insurance than he would if his family lived in Hawaii.

Can I Reduce My Premium?

We know you're probably interested in any way possible to lower your premium - especially if you live in a state that can use your child's age alone as a reason to charge you more! Well, you're in luck. There are several ways that you can get discounts when adding your teenager to your policy. Please note that not ALL states or insurance companies offer these discounts. This is a collection of possible ways to receive discounts, but you should check with your specific insurance company on their individual policies.

How Long Before My Teen's Premium Rate Goes Down?

Most teen drivers' insurance rates tend to go down at the age of 25 and continue to do so until the age of 70. That's good news, right? But, what's the big difference between 25 and 18 or 21? Responsibility and experience. Yes, 18 is the legal adult age. However, while considered "grown-ups", they are still in their teens, and most likely about to go away to college. With college comes less of a reason to drive and less practice on the road. College students typically visit home and borrow the car, making themselves a potential risk with their lack of driving experience. Insurance companies feel that, by the age of 21, these young people may have more experience driving than a teenager, but also have the added pressure of a legal drinking age to deal with. Most insurance companies are of the belief that, by the age of 25, an individual may be working, more responsible and have many more years' experience under their belt. All of these new factors have an added factor that deems it acceptable for their rate to be lowered.

So if you're child is about to get their license, do yourself a favor and call your insurance company to find out what the damage will be to your wallet and ask about any discounts that may be available. Although you may feel loyal to your insurance company, it also never hurts to check around for possibly lower quotes from other agencies. If you've got multiple insurance policies (auto, home, etc.), you may also be eligible for a multi-policy discount.