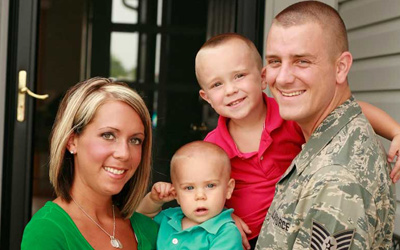 Rights Under the Civil Relief Act

In many situations, the SCRA protections are not automatic, but require some action to invoke the Act. For example, to obtain a reduction of your pre-active duty mortgage or credit card interest rates, you should send your lender/creditor a written request and a copy of your mobilization orders.

If you think that you have rights under the SCRA that may have been violated, or that you are entitled to be shielded from a legal proceeding or financial obligation by the SCRA protections, you should discuss the matter with a legal assistance attorney or a civilian lawyer as soon as possible.

One of the most widely known benefits under the SCRA is the ability to reduce pre-service consumer debt and mortgage interest rates to 6% under certain circumstances. How does the 6 % interest rule work?

Consider this example: Three months ago, Mr. Smith and his wife bought a car for $13,000, paying $1,000 down and financing $12,000 at 9% interest. Last week, Mr. Smith was called to active duty as Staff Sergeant (SSG) Smith. Before entering active duty Mr. Smith earned $42,000 per year. As a staff sergeant he now earns almost $27,000 (a staff sergeant with more than 12 years of military service from Defense Finance & Accounting Service. Because of the SCRA, SSG Smith may ask the car financing company to lower the interest rate to 6% while he is on active duty -- military service has materially affected his ability to pay since he is earning less money on active duty than before. SSG Smith should inform the finance company of his situation in writing with a copy of the orders to active duty attached, and request immediate confirmation that they have lowered his interest rate to 6% under the SCRA. The finance company must adjust the interest down to 6% unless it goes to court. In court, the finance company, not SSG Smith, would have to prove that SSG Smith's ability to pay the loan has not been materially affected by his military service. The 3% difference is forgiven or excused, and SSG Smith need not pay that amount. SSG Smith does need to continue making the monthly payments of principal and interest (at 6%) to avoid his account being considered delinquent. Continuing payments should also avoid any adverse credit reports from the finance company. (See Section 207, SCRA)

Note: In some situations, civilian employers have agreed to pay the military member the difference between the military pay and the civilian pay earned before the call to active duty. In most such situations, military service has not materially affected the member's ability to pay, so it is unlikely that the SCRA 6% interest limitation applies. Of course, if the military member's expenses increased (for example, the member must pay for a second apartment at the duty station, or the member's spouse gave up her job to move with him), military service might have materially affected the member and the SCRA 6% interest limit could apply. What would have happened if, instead of buying the car before he came on active duty, SSG Smith left his car at home for his wife and purchased a used car at his duty station? To do so, he borrowed $4,000 at 9% interest. Since SSG Smith took this debt after entering active duty, the SCRA 6% interest limit does not apply.

Delay of Court and Administrative Proceedings

Another significant change provided in the SCRA is found in Section 305. The prior law only allowed the termination of pre-service "dwelling, professional, business, agricultural, or similar" leases. The new provision in the SCRA allows termination of leases by active duty servicemembers who subsequently receive orders for a permanent change of station (PCS) or a deployment for a period of 90 days or more. The SCRA also includes automobiles leased for personal or business use by servicemembers and their dependents. The pre-service automobile lease may be cancelled if the servicemember receives active duty orders for a period of one hundred-and-eighty (180) days or more. The automobile lease entered into while the servicemember is on active duty may be terminated if the servicemember receives PCS orders: (1) to a location outside the continental United States; or (2) deployment orders for a period of one hundred-and-eighty days or more. (See Section 305, SCRA)

Eviction for Nonpayment of Rent

Although the SCRA does not excuse soldiers from paying rent, it does afford some relief if military service makes payment difficult. Military members and their dependents have some protection from eviction under the Servicemembers Civil Relief Act (SCRA), Section 301.

The landlord must obtain a court order to evict a military member or his/her dependents. The court must find the member's failure to pay is not materially affected by his or her military service. Material effect is present where the service member does not earn sufficient income to pay the rent. Where the member is materially affected by military service, the court may stay the eviction (for three months, unless the court decides on a shorter or longer period in the interest of justice) when the military member or dependents request it. There is no requirement that the lease be entered into before entry on active duty, and the court could make any other "just" order under Section 301 of the SCRA.

The requirements of this section are: (1) the landlord is attempting eviction during a period in which the service member is in military service or after receipt of orders to report to duty; (2) the rented premises is used for housing by the spouse, children, or other dependents of the service member; and (3) the agreed rent does not exceed $2,400 per month. Soldiers threatened with eviction for failure to pay rent should see a legal assistance attorney. The amount is subject to change in future years. As of 2004, the ceiling is $2465.00.

If a default judgment is entered against a servicemember during his or her active duty service, or within 60 days thereafter, the SCRA allows the service member to reopen that default judgment and set it aside. In order to set aside a default judgment, the service member must show that he or she was prejudiced by not being able to appear in person, and that he or she has good and legal defenses to the claims against him or her. The servicemember must apply to the court for relief within 90 days of the termination or release from military service. (See Section 201, SCRA)

The SCRA also permits the servicemember to request deferment of certain commercial life insurance premiums and other payments for the period of military service and two years thereafter. If the Department of Veteran Affairs approves the request, the United States will guarantee the payments, the policy shall continue in effect, and the servicemember will have two years after the period of military service to repay all premiums and interest. The SCRA increases the amount of insurance this program will cover to the greater of $250,000.00 or the maximum limit of the Servicemembers Group Life Insurance. (See Section 401, SCRA)

The Federal Reserve
Equal Credit Opportunity Act
Where Do Our Taxes Go?
What To Do With Your Tax Refund