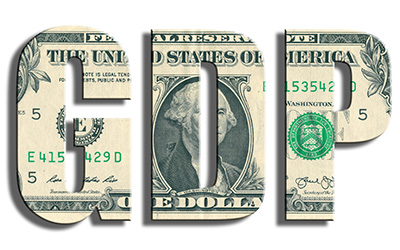 GDP is short for Gross Domestic Product, which is the total dollar value of all final goods and services produced in a country in a given year. Here's some basic information about the GDP, such as how it's calculated and how it affects you.

What is Gross Domestic Product?

Consumption: Refers to personal or consumer expenditures. In other words, it measures the dollar value of goods and services purchased by consumers. These items would include food, clothing, and landscaping services. Any new purchases by consumers can be counted as part of the GDP.

Investments: In this case, the term does not refer to the stock market or other securities transactions. In fact, these types of transactions are not included in GDP at all. The type of investment that is referred to here is when money is put directly into a business. For example, if a company builds a new factory or buys new equipment, those transactions will be included in GDP.

Government Spending: The dollar amount of goods and services purchased by the government. These may include fighter planes, automobiles for the FBI, or even college classes for government employees.

There is great effort made not to double-count transactions. There are many products that are produced and then changed into another product. Take steel, for example. If an auto manufacturer purchases 20 tons of steel to make seven cars, the GDP cannot include both the value of the steel AND the value of the cars without counting the steel twice. There are two sales involved here: the purchase of raw steel by the auto manufacturer and the sale of the finished steel in the form of the automobile. They are in different forms, but it is still the same steel. To get around this problem, GDP counts only the value added of many finished products. In the case of the automobiles, the value added would be the sale price of the car minus the cost of the raw steel. So, in this case, GDP counts the purchase of the steel and the value added of the automobiles.

Another factor economists must consider is that prices change. Since GDP is based on prices, price fluctuations can make it difficult for economists to measure the true output of the economy. To capture true output rather than price changes, a statistic called Real GDP is often used. Real GDP is GDP adjusted for the effects of changes in prices. Adjusting for price changes gives economists a better insight as to what the GDP numbers are saying about economic growth.

What does the Gross Domestic product mean to me?

The Gross Domestic Product (GDP) is a measure of production. It tells us the dollar amount of everything produced in our economy over the course of a year. So what does it mean to individuals? GDP will not have a direct impact on most peoples' lives, but it does impact government policy on topics as diverse as tax policy and the level of funding for social programs. Since GDP measures output, it is a good measure of the overall health of the economy and the well-being of our citizens.